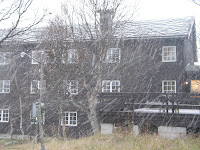 Today it came a few centimeters of soft snow. First it started as hail and turned later into soft snow. It's not often that we get snow in september, and this won't stay very long. It is still quite warm weather, with temperatures up till +8 degrees during daytime. So the real huge amounts of snow will not come for another few weeks.
Posted by Karl Thomas at Monday, September 28, 2009 No comments:

This week we had an organized walking program in co-operation with Norske Bygdeopplevelser and Vi over 60. It was an easier program compared to what we normally do, with Dørdalen and Mya on monday, Trabelifjell and Forbundsfjell on tuesday, Sollia on wednesday and Svartfjell and Dynjefjell on thursday. With a farwell dinner on thursday eve.
The weather was brilliant, with a few showers only. And we sang along all the way.
We were lucky with all the colours too, as we were progressing the week, there were less and less colours so now there are almost no colours anymore.
And now there are no more organized walks until mid june 2010.
By the way, the horses are gone too. They will be back around june 2010, as the summer holiday starts....
Posted by Karl Thomas at Sunday, September 20, 2009 No comments: 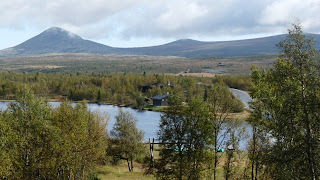 Good morning. I can not believe it is already September, maybe it is just me but the time is running faster nowadays :) Last night we had some rough weather, hail, lightning and lots of rain. Looking out of my window now, it seems to be settled and we might have some sunny days ahead of us. It is time to enjoy the colours and proper visibility, it has been a while I have seen Muen :)
Our summer season is almost over, I will be out for a few weeks again preparing for the winter season. Please keep checking the blog.
Posted by Robert at Wednesday, September 02, 2009 1 comment: