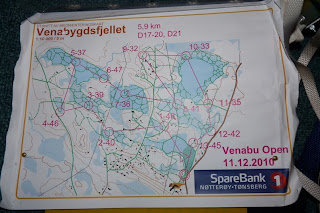 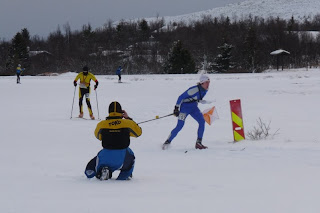 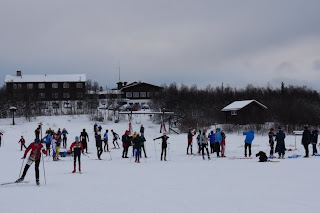 Despite of the snow depth in Venabygdsfjellet, we still host the annual ski orienteering weekend. The organizers are putting in an amazing effort to make it happen. Facing lack of snow, wind and long hours of preparation. The competitors also face most of these challenges once the courses are cleared for each race. Yesterday first time in my life I decided to participate. After sppending more than 22years in competitive orienteering and many years in skiing I finally put them together. Of course I did not dare to compete with the elite men, but I completed the elite women's course, which was about 6km. Since I do not have my "fancy competition dress" here I represented a new "ski guide class" with heavy boots, backcountry skis and classic style. I probably went to slow to be challenged technically, but I hadf to put some decent effort to finish. I was pleased to cross the finishline after 46minutes of battle, which put me more than 13minutes behind the best time. The conditions could have been better, but I think most of the competitors have got what they came for. Norway hosts the European Ski Orienteering Championship in February and Sweden the World Championships, so this competition is part of the long preparation for most of the elite athletes. I also discovered many clubs and even other nationalities on the start list. Lets hope for another great race today.
Posted by Robert at Sunday, December 12, 2010

Email ThisBlogThis!Share to TwitterShare to FacebookShare to Pinterest
Labels: Around the hotel, Winter activities