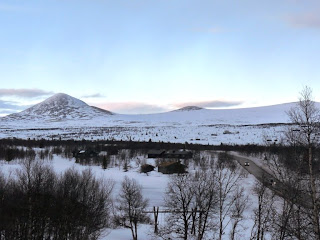 Good morning, at 7AM: -4.2 Celsius, light air, clear sky and great visibility. Ahead of another nice and sunny day. We are looking at a similar pattern of weather what we had in last days: colder start and mild conditions during afternoon.
PS: Snow is needed!

Trail, snow and weather update: I have decided to go out on our well known "Outer Circle" to see the conditions on our outer trails. I started from Venabufjellhotell: Heading south I found ok trails/snow towards Kyrkjegardsfjellet, then I headed up to Forbundfjellet where I found snow in only patches. Down to Trabelia was fine. Good trails up towards Svartfjellet, but on highest point - almost no snow. The descent was fine, but hard and icy snow. Then I continued up through Kvandalen where I found a short section with little snow and some rocks showing through. Indre and Fremre Uksan was fine. Oygardseter area- very little snow, but trails were holding. Around Veslefjellet was ok - beaten trails (prepared 2 days ago and there have been many skiers in the afternoon periods when snow was soft). Finally I came to Trimloype which was prepared a few days ago, so I was challenged by the beaten trails back to Venabufjellhotell.
Close to roads snow was retreating, so I had to be careful not to ski on rocks, gravel and dirt.
As we look around we can find most of the mountain tops snowfree at the moment, hopefully we could get some new snow to patch them up.
Overall trail condition is still good - it seems like we are in mid April.
Weather was fine - it turned out to be cloudy, but still had/have great visibility. Temperature was close to zero all day (around +1 Celsius) with some wind. Looking ahead I have just checked the forecast where I saw some promising sings for next days - even for tonight. Lets keep our fingers crossed.
Posted by Robert at Saturday, March 17, 2012

Email ThisBlogThis!Share to TwitterShare to FacebookShare to Pinterest
Labels: Outer Circle, View from my window